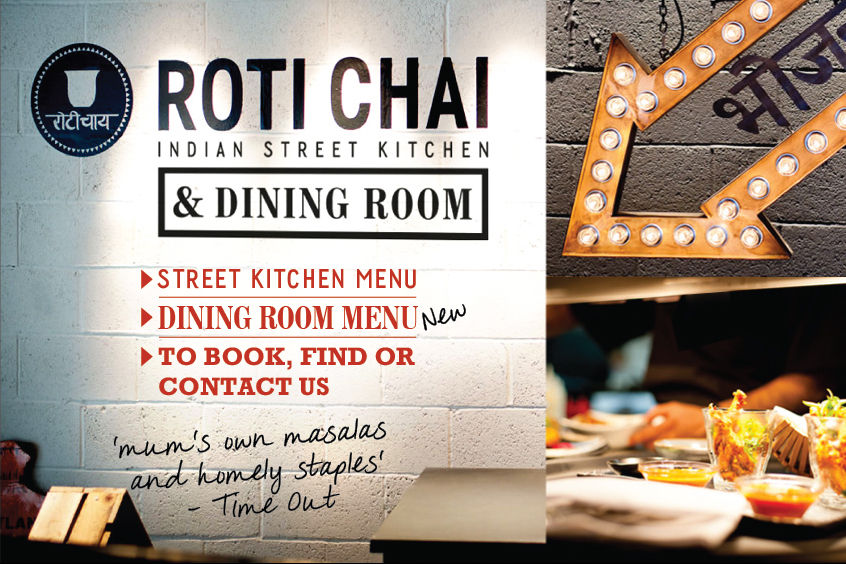 Today I visited Roti Chai, a not so small cafe / restaurant not far from Selfridges behind Oxford st.  Roti Chai, sells a cross section of Indian street style food, small tasty morsels of popular fast food from across India and as the name suggests Chai, or sweet Indian Tea made with milk and infused with spices.

I like going to Roti Chai. The place has plenty of natural light, seems friendly and the decor is reminiscent of the murals and truck art that is seen widely through India. It reminds of me my time in India. The food is tasty and reasonably authentic in a hygienic British way and comparably not bad value for money in the middle of the tourist belt of Oxford St. I even drink the chai there considering I hate tea. I have never really liked tea even though my parents drank gallons of the stuff when I was growing up. I got introduced to the hot sweet, spicy chai in India and loved to drink it steaming hot by the roadside out of tiny terracotta or glass cups. Watching chai being prepared by a chai walla is an experience in itself.

Back in the west I am not so fussed, but a few months back I had a chai at Roti Chai that I enjoyed and now look forward to that unique taste served in the traditional chai glasses whenever I am in that part of town. The bhel puri and vegetable samosa with chutney is also hard to resist. Until today that is; today I got served warm, thin, weak chai, which of course we sent back, only to see the chai walla insert the milk frothing wand on the espresso machine into each glass to heat it up. We got back the same chai, still weak and thin but at least piping hot. Gone was my vision of the chai being cooked slowly in a pot, giving it time for the spices to infuse and the taste to develop before being strained and served steaming hot and fresh.

Maybe I will return here, maybe I won’t, but I will certainly never order chai again. Maybe the chai walla was new, maybe he was having a bad day, but it doesn’t really matter I don’t want to visit there anymore and I won’t take my friends there for chai anymore.

One of the hardest things for an independent restaurant to obtain is continuity with its food. Unlike the large chains whose food is processed and managed from some central food manufacturing plant down to the last crystal of salt, the last puff of flour to ensure that it looks and tastes exactly like the same no matter what day or where you buy it; independent eateries are usually born of a vision from the owner to create a unique taste and experience, whilst been freshly prepared and cooked on the premises.

The visions from this would be restaurateurs or chefs coming either from a new vision, idea or the desire to recreate the home cooked food from their home, their childhood memories, often from a land far from where the restaurant of today is. The recipe, the love and ambience in the way that it is prepared and served is usually just as envisioned during the early days but once the popularity grows and the visionary has to start to rely on other people to keep preparing and serving the food day after day, this is usually when the cracks start appearing.

Visiting an independent restaurant, I do expect some variations of the same dish on different day. Slight variations of seasonal differences and the flair of different chefs even though cooking from the same recipe.  I do however; expect that the standard of taste, presentation and quantity remain constant. What annoys me is that when I find a place that I enjoy visiting regularly I find suddenly that the one thing I enjoy is now substandard, disappointing and no longer exciting or value for money.