Not so sweet; Mr Whippy 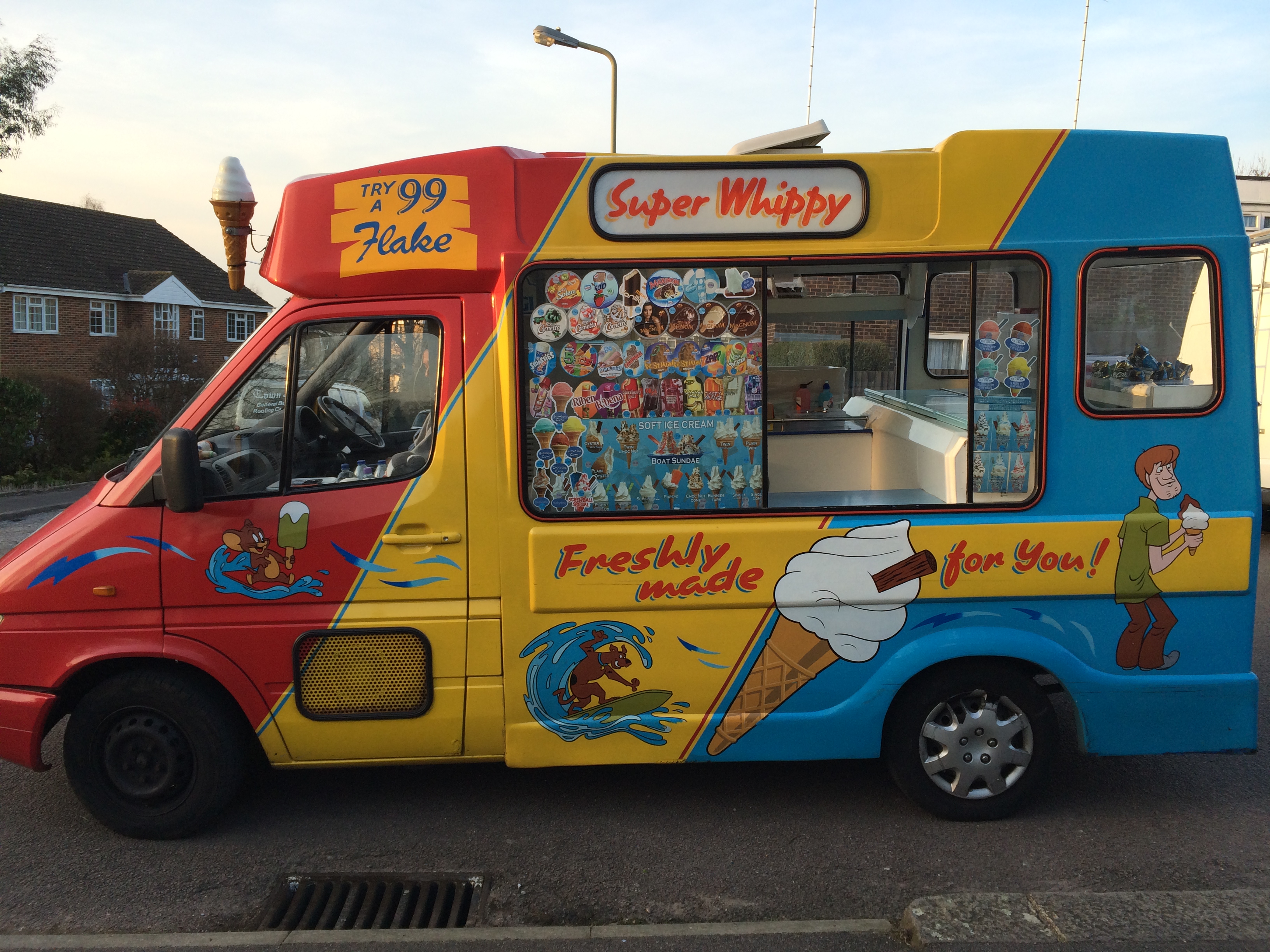 I just had to post this photo of Mr Whippy.

I heard the familiar jingle as I was walking through the park on a warm spring evening. Instantly I was taken back to my childhood when we used to love the sound of Mr Whippy on a hot summers day and after convincing mum to part with a few coins, nothing seemed nicer than watching the white creamy ice cream being twirled into a cone then sprinkled with 100s n 1000s and if we were lucky a small chocolate flake being pushed in the side.

Today however, apart from bringing pleasant memories of another life in another time, I have a completely different reaction to Mr Whippy. Maybe its because I am an adult, no longer excited by a jingle promising a sweet cold delight. All I can see now is preservatives, sugar, food colouring, palm oil, guar gum and really what is it made of to make it so smooth, so sweet and so white. I don’t even like to think about the intentions of the lone man driving a truck around full of sweet treats followed by young children with not a worry in the world. Sorry to all the decent men out there, but this is the reality us parents have been forced to think about these days.

Once again, unhealthy, sugar loaded food, this time being driven around in a brightly coloured van playing enticing music with the promise of sweet cold treats on hot days. Am I a cynic, am I too old, am I thinking too much? I don’t really know, but I do know I am glad I don’t have  young impressionable children that want to run after Mr Whippy in pied piper fashion excited about the poison that is processed whipped ice cream.

The whipped ice cream squirted out of a nozzle to make the cones which you buy from an ice cream van, used to contain pig fat or lard. Today, filling ice cream with commercial vegetable oils is a common practice.

These oils are not only industrially cheap, it is also unhealthy. Used in margarines, lipstick and detergents, this yellow liquid is high in saturated fat, a known cause of cardiovascular problems.

The amount of dairy produce an ice cream must contain in order legally to qualify for the name is appallingly low. The FSA requires dairy ice cream to have a minimum of 2.5 per cent of milk protein and an additional minimum 5 per cent of dairy fat. Thats all.

The only good news is that in dairy ice cream vegetable fat is not allowed. But this is not the case with anything labelled simply ice cream.

Here, the product is merely required to contain 2.5 per cent milk protein and 5 per cent of any kind of fat. This rarely comes from any fresh ingredient. Partially reconstituted skimmed milk is one source. Another is whey solids.

Whey is the liquid left over when milk is turned into cheese,  It is produced in vast quantities by the dairy industry.

A hugely problematic waste product, whey was for years dumped into rivers, or discharged into the sea.

Dried out to a pale green powder for ease of storage and transportation, it now acts as an exceedingly cheap protein carrier and sweetener, although sometimes even the sugar is taken out to be repackaged and resold.

All of these vegetable fats and milk-based products are what the industry, with refreshing honesty, refers to as bulking agents or fillers  cheap ways of adding volume but not cost to the ice cream.

There is one more: thin air. Ice cream is sold by volume, not weight, so a way of making it go further is to whip as much air into the mixture as possible before freezing it into plastic tubs.

The bland bulk of this mix is then titivated with a slew of other unappealing extras. There are the colourings, often referred to by name, because, like annatto, they often sound pretty, rather than E number (in this case, E160b).

It is used in place of the controversial colouring tartrazine (E102) to tint the mixture to something that more closely resembles the rich colours we associate with clotted cream. The Hyperactive Childrens Support Group considers it to be an allergen.

Emulsifiers such as diglycerides of fatty acids prevent the fat and water content separating into a greasy puddle.

Perhaps most worrying is the flavouring. Manufacturers are coy about revealing how they have achieved a specific taste, passing off goodness knows what in the ingredient list under the meaningless catch-all flavouring.

If you hope for an ice cream whose taste relates in some intelligible way to the words on the carton, it also pays to be label aware.

Producers can use pictures of fruit on the label or tub only if the ice cream actually has some real fruit (as opposed to synthetic flavouring) in it. Anything marked raspberry-flavoured ice cream, however, has probably never seen a raspberry in its life.

Suddenly, the exciting jingle of Mr Whippy’s van doesnt seem quite as appealing.