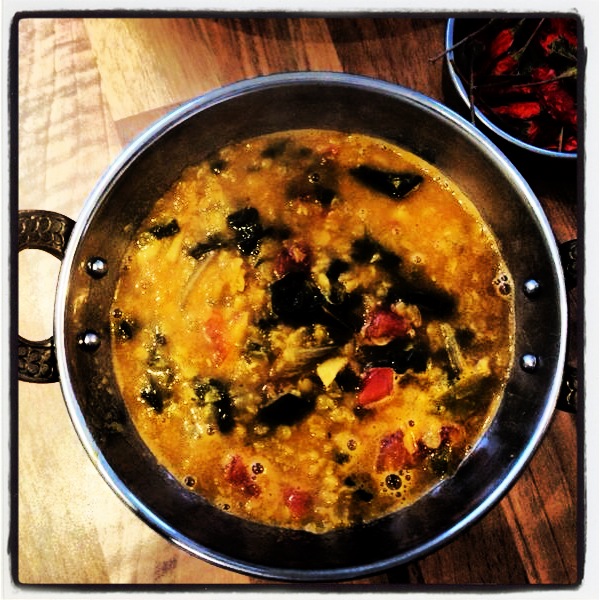 I first got introduced to lentils when in my pre teens my mother and my older sister decided to go on what was colloquially called a ‘health kick’. My mother who suffered from terrible migraines, was prepared to do anything to get relief from the merry go round of severe headaches and pill popping to try and relieve them. My sister as I remember was becoming aware of her health and body as girls tend to in their young adult years. It was also  at the end of the hippy era where sprouts, chickpeas and alternative living were in fashion.  Things such as cottage cheese and tofu appeared in the fridge, ryvita crackers and vogels bread replaced the thick soft white bread we had been brought up on, alfalfa sprouts were being cultivated in an agee jar on the window sill and hard, flat, greenish- brown pea looking things called lentils were being stored in our cupboard.

My mother told me they were a meat alternative, good protein and really healthy, I was dubious, especially when served up as an insipid looking   thick dirty brown soup. Not for me I decided, although I did start embracing the other new additions to our diet and started making my own foray into new food styles and tastes. For me though my motivation was not heath, body image or the fashionable hippy generation. As an avid reader I tended to choose books about travel, adventure, intrepid journeys, other cultures and far away lands. As I matured these novels turned more into non fiction or more historically correct fiction. I read about India, Africa, the Vietnam war, Cambodia and the Khmer Rouge, the Irish troubles, Pakistan, Afghanistan, Nicaragua and so on. Growing up in New Zealand these countries were as far away and as accessible as the moon to me but I couldn’t get enough, I scoured every library I could for information to feed my growing mind.

A big part of this early journey was through food, no story was complete without some inclusion of the local diet, Vietnamese Pho, Panang Curry, Burrito’s, Biriyani, Samosa, chillies, wild rice, tacos, roti, refried beans and of course Indian Dhal. Imported food was not so easily available in New Zealand when I was growing up, but I did try to recreate these tastes that I had read about but had nothing to compare to. I had no idea whether what I was creating in our little kitchen was anywhere near authentic, I had limited resources and a good portion of the ingredients were not available, but I did know my tastebuds were being transported to foreign lands and my desire for  knowledge and travel was growing at lightning speed.

Back to the Dhal, I remember buying yellow split peas, garlic, chilli powder and curry powder from the grocer and giving it a go. Adding onions and dusty mustard seeds I found at the back of our cupboard I managed to cook something that was palatable and tasty enough but not really inspiring enough to recreate.

A few years later after I had left home, my mind on my own health, I became interested in sports and chose through this process to not eat meat. Remembering my mothers words I turned to lentils, uninspiring but with enough garlic, chilli and my new found love of fresh coriander actually became quite tasty at this stage any relation between these ‘hippy’ lentils and Indian dhal was non existent.

Travelling to and later living in India was the final stage in embracing these little hard pulses that I learnt in the West we call lentils and in the East is called Dhal ( both the dry pulse and finished preparation is colloquially called dhal). My mother in law, originally from Mangalore made that tastiest from the little red lentils that Indians call masoor dhal, a simple dish with lots of green chilli and fresh coriander and so so tasty. Another favourite of mine is Tadka dhal, usually using yellow, channa, masoor or toor and finished with a ‘Tadka’ of fried curry leaves, green chillies and black mustard seeds. Of course there are many variations of this as there are types of dhal.  Dhal Makani, a dish made famous by the ITC Bukhara in New Delhi, made with whole black lentils, lots of ghee and finished off with cream is a North Indian staple and eaten widely in the Punjab and the northern states.  Dhal is also used widely through India in other preparations such as Sambhar, a tasty thin vegetable curry that is mopped up with idli or it is ground along with rice and made into a thick paste that is used to make the thin tasty dosa that is a eaten widely throughout the south for breakfast.

Back in the West, I have been introduced to Puy lentils a small green/black lentil grown in Le Puy, France and used in Europe in soups, casseroles and other savoury preparations. Red lentils, yellow split peas and brown lentils are also used in many vegetarian dishes, or as a starch substitute with meat or fish, these days though with a lot more taste and variation than when I was first introduced. I still  vividly remember as a child visiting Wah Lee’s with my mum,  a Chinese food shop in central Auckland that used to be the only place where we could buy such exotic foods such as lentils. I remember large sacks of cashews, almonds, brazils, various spices, lentils and other pulses all stacked on the floor with plastic scoops so we could fill our own bag. Along the shelves were a myriad of sauces and packets of other strange looking ingredients, all exciting and extruding promises of exciting adventures of far away places to a young girl from Auckland holding her mums hand.

So dhal vs lentils, as they say in Asia, same same but different. Too many varieties to list, so many recipes to try.  Both are now a staple in my diet, usually I prefer the spicy Indian version’s that are favoured by my Indian born family but also happy on occasion to eat a well prepared tasty European dish.